Last Thursday was Valentine’s Day and it truly was a day filled with love. It was a pretty eventful day all around. It started with work, which normally would be an average day but my job is pretty awesome we had a full Valentine’s Day party! We had Valentine mailboxes that everyone added candy and little cards to just like back in the day when we were kids in school, a fun team building activity, and it got even better because we had a rented a taco stand for lunch!

Dylan of course had a wonderful evening planned for us. He took me to a very nice restaurant, Redwood in Fremont, where we had some of very delicious food. The best thing, in my opinion, was the pineapple shrimp appetizer. Seriously, I would go there just to get that shrimp again, SOOOOO YUMMY! We both decided to get the New York Strip steak and it was so juicy and tender. To end the night we got fancy (or carried away) and ordered 2 desserts, the creme brulee and the chocolate cake! Both were great, could have gone with just one, especially for the size of the cake. The whole night was wonderful and before we started dinner we both put our phones on silent, and away so there wouldn’t be any distractions. We had great conversation and completely forgot to take a picture since our phones were away.

As for the BIG ANNOUNCEMENT, Dylan and I announced our pregnancy! Yes, you read that right, I am pregnant! It’s been a rollercoaster ride of hormones and the morning sickness has been killer but I think I am finally moving out of that phase as this week I have finally been able to hold food down without the sudden urge to throw up everywhere. I’ll share more about the first couple of months another day but for now I am just so excited to share our secret and to get tell everyone about our sweet growing baby! I am due in August and while it seems far away I know it will be here sooner than I know it! 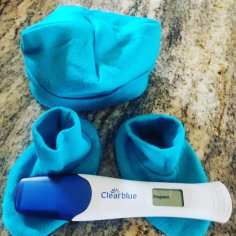 P.S. We still don’t know the gender of the baby, but when I was learning to sew, one of the things I made was a blue cap and booties. I really wanted to use them in the announcement because of all the work that went into them, do you know how hard it is to sew such tiny human clothes!?