Something that has been talked a lot about this year and has become really popular is the instant pot. I have read about it everywhere, I have seen ads for it everywhere, in my news feeds, websites and more! I’ve never had any interest in it, shoot I’ve never even cared to use a crockpot. But lately, I’ve been experimenting with foods and recipes and so, a couple years ago my mom gave me one and I decided to finally use it!

Dylan had been wanting BBQ pulled pork, and for anyone who has made pulled pork knows it isn’t a super quick process, especially if you don’t have the best tools. I was told the instant pot is a miracle worker if you are short on time, and let me tell you it is! I didn’t think it was as good as everyone says, but I would say it is better!

Right when I got home from work I started getting the meat ready, prepped, spiced and all that, then I got the liquid ready (you need it for the instant pot), spiced, the type of broth and BAM into the instant pot! Let me tell you, the instant pot at first seemed like a space ship, buttons, pressure, time and all that stuff. I was scared I was going to mess it up. It ended up not being as complicated as i had made it in my head.

I simply sautéed the pork for about 5 minutes until all the sides were nice and cooked. Then I added the liquid and put the lid on, I put the timer to 90 minutes and let it do its thing. I didn’t have to worry about water boiling over, or making sure everything in the kitchen was okay. I sat down in the living room watched some TV and 90 minutes later the timer went off. 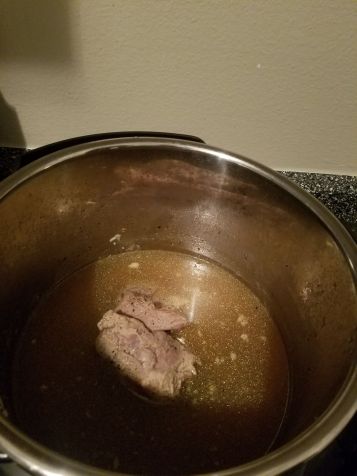 The pork was tender, moist, and basically shedding itself! I’ve never had such an easy time shredding pork before. A little tip: use a hand mixer to shred, its takes about 100% of the energy off of you and is super quick! Last thing was to throw some BBQ sauce on the pork and dinner was ready.

It truly was the easiest, least effort required meal I have made in long time that didn’t involve getting food from where. I plan on using my instant pot a lot more moving forward now that I know it really isn’t complicated and makes some delicious food (and I will share the recipes as I go)!